Garris et al. GAMES, MOTIVATION, AND LEARNING a research and practice model (2002)
Dat games de betrokkenheid van de speler vergroten is bekend, maar of het ook als educatief tool werkend is was nog niet wetenschappelijk onderzocht, maar bij deze… als volgt: 1 what are gamelements? 2 what is the nature of the motivational process that these trigger in the user? 3 how do instructional games affect learning outcomes?
Below some quotes:

Based on a review of the literature, we conclude that game characteristics can be described in terms of six broad dimensions or categories: fantasy, rules/goals, sensory stimuli, challenge, mystery, and control. Any type of game can be described in terms of these six key dimensions. Moreover, they provide a common vocabulary for describing and manipulating the core elements of games for instructional purposes.

About Challenge and mystery specific:
Malone and Lepper (1987) noted that curiosity is one of the primary factors that drive learning. Following Berlyne (1960), they described two types of curiosity: (a) sensory curiosity, the interest evoked by novel sensations (which we have described as sensory stimuli above); and (b) cognitive curiosity, which is a desire for knowledge. Most experts agree that curiosity reflects a human tendency to make sense of the world and that we are curious about things that are unexpected or that we cannot explain (Loewenstein, 1994). Thus, curiosity is a product of perceived discrepancies or incon- sistencies in our knowledge. Moreover, we seek an optimal level of informational complexity. At a very low level of discrepancy, if a piece of information is only some- what discrepant, we may easily dismiss it without much attention. If there is too high a level of discrepancy between our existing knowledge and new information, informa- tion may be too confusing or bewildering to incorporate. Therefore, curiosity is stimu- lated by an information gap in our existing knowledge that is intermediate—not too simple or too complex.
Research suggests that mystery is enhanced by incongruity of information, complex- ity, novelty, surprise and violation of expectations (Berlyne, 1960), incompatibility between ideas and inability to predict the future (Kagan, 1972), and information that is incomplete or inconsistent (Malone & Lepper, 1987). Adventure themes often involve a search for information or exploration of unknown settings. Furthermore, embedding activities in fantasy contexts allows the student to encounter imaginary situations that differ from our knowledge of how things work in the real word, stimulating curiosity.
The willingness or desire to engage in a task has been termed motivation. More specifically, motivation refers to an individual’s choice to engage in an activity and the intensity of effort or persistence in that activity (Pintrich & Schrauben, 1992; Wolters, 1998). 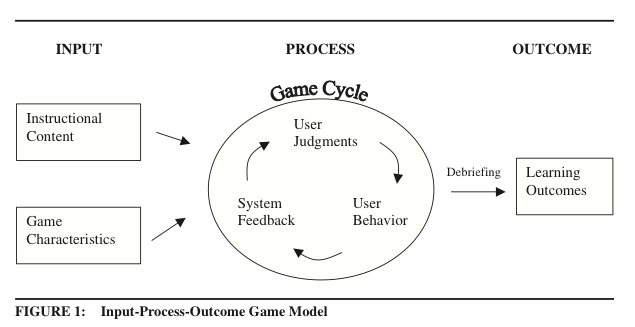 We view the game cycle as iterative, such that game play involves repeated judgment-behavior-feedback loops. That is, game play can lead to certain user judgments or reactions such as increased interest, enjoyment, involvement, or confidence; these reactions lead to behaviors such as greater persistence or intensity of effort; and these behaviors result in system feedback on performance in the game con- text. Thus, the game cycle is a defining characteristic of computer game play—that users are engaged in repetitive play and continually return to the game activity over time.
The game cycle focuses attention to a critical chain of dependencies: (a) To elicit desirable behaviors from learners, (b) they first need to experience desirable emotional or cognitive reactions, (c) which result from interaction with and feedback generated from game play.
As users initiate game play, they make subjective judgments regarding whether the game is fun, interesting, and engaging. These judgments are typically represented by self-reports of interest and engagement, enjoyment, and feelings of mastery.
We have characterized the game cycle as a repetitive, compulsive, or even addictive process, reflecting the manner in which users are engaged in and repeatedly return to game play. One question regarding this type of absorption in any activity is, At what point does this ardor cool? That is, game players often play a game obsessively until they are “played out” and then become enthralled in a new game. In an early meta- analysis of the effectiveness of simulation games, Dekkers and Donatti (1981) found a negative relationship between duration of training and training effectiveness. In other words, simulation games became less effective the longer the game was used (suggest- ing that perhaps trainees became bored over time). Although research has attempted to identify the game characteristics that initiate player engagement, we know very little about how this process is sustained over time. Does engagement in a game wane over time? At what point do games lose their appeal? What factors sustain interest over time?
Interest: Expressed interest in or preference for an activity
Enjoyment: Subjective ratings of fun or enjoyment
Task Involvement: Level of attention or depth of involvement in educational activities – The degree of immersion experienced in a computer game may be determined by several factors, including: (a) control factors, or the extent to which actions taken to control or manipulate the environment are immediate and natural; (b) sensory factors, referring to the quality, richness, and variety of information presented to the senses; (c) distraction factors, or the extent to which the user is isolated from the external physical environment; and (c) realism factors, including scene detail, texture, and realism (Witmer & Singer, 1994)

Confidence: Feelings of mastery or self-efficacy
We believe this sustained involvement, or what we term persistent reengagement, is the cornerstone of computer game play and epitomizes the behavior that is coveted by instructional designers. That is, those who form positive user judgments more actively engage in game play, exert intense effort and concentration, and return to game play unprompted.
Affective reactions include feelings of confidence, self-efficacy, attitudes, prefer- ences, and dispositions. Affective reactions may be viewed as a specific type of learn- ing outcome to the extent that attitude change is a training objective of an instructional program. Some research has shown that games can influence attitudes. For example, Thomas, Cahill, and Santilli (1997) reported success in using an adventure game for- mat to enhance students’ confidence regarding safe sex negotiations.
One of several conclussions Garris made:
research is needed to examine and elaborate the game cycle in more detail than we have accomplished here. Although it is generally accepted that computer games are engaging for many people, what is fun to some people will not necessarily be fun to others.
Identifying significant mediating variables is an important step in understanding the attraction of games and the effectiveness of instruction. Analyses of training effec- tiveness have revealed a number of variables that mediate training outcomes. Three such attitudinal constructs are locus of control (Bar-Tal & Bar-Zohar, 1977; Kren, 1992; Reimanis, 1970; Rotter, 1992; Spector, 1982), self-efficacy (Ames, 1984; Bandura, 1977, 1986; Gist, 1988), and valence (Vroom, 1964). According to Lefcourt (1976), locus of control describes characteristics of individuals that correlate with their willingness and ability to take initiative to pursue desired outcomes. Self-efficacy determines what activities people participate in, how much effort they will put forth, and how long they will persist to overcome difficulties (Tipton & Worthington, 1984). Vroom (1964) reported that the valence of an activity (or the attractiveness of out- comes) plays a major role in effort expenditure. We believe that training experiences can change students in other ways than just increasing knowledge. We propose that the game cycle—the recurring judgment-behavior-feedback loops that characterize game play—can lead to changes in locus of control (the perception that outcomes are a result of one’s own control), self-efficacy (perceptions of competence and mastery), and valence (the value placed on the activity). Moreover, a student that values an activity, believes he or she has the skills to achieve it, and has the capacity to control desired out- comes, is more likely to achieve educational goals. Further research is needed to estab- lish these relationships.